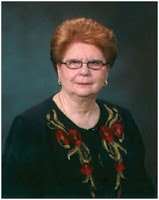 Congratulations to Orysia Sushko on being appointed to the Order of Canada by Her Excellency the Right Honourable Michaëlle Jean, Governor General of Canada.

Mrs. Sushko is immediate past President of the Ukrainian Canadian Congress, and a recipient of its most prestigious award, the Taras Shevchenko Medal. She was appointed to the Order of Canada for her long time community activism in promoting multiculturalism, diversity, and women's rights, as well as for supporting the Ukrainian Canadian community.

"I would like to take this opportunity to personally recognize and congratulate Orysia for her efforts and on this very prestigious recognition," he said.

Awarded for the first time in 1967, during Canada's Centennial Year, the Order of Canada launched the creation of our country's own system of honours. More information on the Canadian Honours System can be found here.
- June 30, 2010 No comments:

Visit the Nash Holos website for the latest programming updates. More to come as I catch up with the backlog during my online absence since March. But, I'm b-a-a-c-k!

This week's recipe is kapusta crepes. It's an "encore presentation" and will be the first of several more as Judy will no longer be hosting Ukrainian Food Flair. Her business, Prairie Cottage Perogies in Langley, is growing leaps and bounds and requires her full attention.

Also, there is the matter of Nash Holos studios and recording facilities having recently relocated to Vancouver Island. Which makes in-studio recording just a tad difficult for folks on the Mainland. For that reason, Fr. Edward Danylo Evanko also gave his farewell broadcast on Sunday.

I will miss both dearly, but as they say in the biz, "the show must go on." So if anyone is interested in filling their shoes, and also has some technical abilities, I'd love to hear from you!

On this week's program, Fr. Edward discusses change, which was very apropos. Vasyl talks about Constitution Day in Ukraine, which brings to mind (at least to mine!) some interesting historical parallels with Canada and democracy as it evolved over the last century.