Unusual yet still traditional recipes, the latest news, interesting people and great Ukrainian music as usual on the past two editions of Nash Holos. Here's what's on:

Greetings to the Most Reverend Bishop Chmilar, and Your Grace Bishop Andriy.

Thank you Paul for those kind words.

I am honoured to receive this award and such a warm welcome from the Ukrainian-Canadian community.

The Ukrainian Canadian Congress does tremendous work to promote the Ukrainian cause in Canada. So let’s

In Toronto today, Prime Minister Stephen Harper accepted the Shevchenko Medal Award, for his and the Canadian Government’s many contributions to the Ukrainian-Canadian community and the people of Ukraine.

"I am honoured to receive this prestigious award that recognizes the significant efforts our Government has made to address the needs and interests of our vibrant Ukrainian-Canadian community and to strengthen our ties with Ukraine," said Prime Minister Harper. "Our Government will continue to acknowledge and embrace the contributions of Ukrainians, their struggles for independence and their contributions to Canadian society."

The Harper government has taken

Here's what's on this week's Vancouver October 09 podcast and 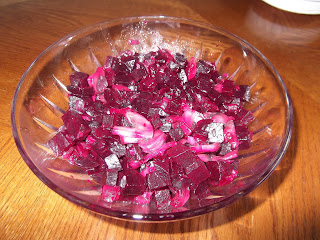 While we're certainly accustomed to beets in soup, pickled, or roasted with other root vegetables, they're also excellent in salads!

In addition to their wonderful taste, beets have outstanding health benefits as well including (among other things) high amounts of beta carotene, vitamin C and iron. Perhaps this is why they're the pagan symbol for love and beauty!

I was introduced to this recipe some time ago by Nash Holos food columnist, the late Sylvia Molnar. I thought it was an unusual (even odd) combination for a salad, but gave it a try ... and it's become one of my favourites.

It's a make-ahead, so on top of being easy to make in the first place, it's one less thing to worry about during meal prep time. 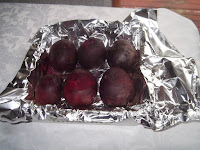 In a pinch, canned beets can be used in this recipe. But I prefer using fresh beets. They have a rich, sweet earthiness that gets lost in the canning process.

Beets can be prepared easily enough. Choose beets in similar size. Wash them well, wrap in foil and roast at 400ºF for about an hour, or until tender when pierced with a thin bladed knife. The skins will slip off easily once they’re cooked.

Less messy than peeling them raw and boiling!

One of the performers traveling across this month with The Talents of Ukraine 2011 show tour is contemporary violinist Innesa Tymochko. Now a New Yorker, Innesa originally hails from , where she studied music and launched a musical career that had her performing on stages throughout .

With charming candour, she admits to an abiding love of Ukrainian folk music, the stage, and pleasing audiences with her music. This woman's joy of performing shines through the minute she first pulls the bow across the strings. She'll then take you on a musical journey that is guaranteed to pluck the heartstrings of any Ukrainian folk music lover.


This will be Innesa's first trip to and she is very excited to be part of this tour. It starts out in on Tuesday, October 11 at the for the Performing Arts. After that it's on to Vernon for a Wednesday evening performance, then to other points east, wrapping up in Montréal on October 25.


If you haven't bought your tickets yet, don't wait a minute longer! This will be a show you don't want to miss.

Along with Innesa, you'll be delighted with the performances of two outstanding singers from as well as the spectacular Donbas Song and Dance Company of . Tickets for the performances in can be purchased from Ticketmaster, and elsewhere from the venues where the show is being held. Details at the Boen Arts website and in earlier posts (here and here).


Innesa has her own website which is www.innesa.com and you can read more about her and order her CDs there.

Meanwhile, I found a few YouTube videos of Innesa performing. They’ll give you an idea of her onstage charisma. But there’s nothing like the real thing! So I hope you'll join me in seeing her perform live on stage in ... or at a venue close to you.

This is Vivaldi's Storm, which opened the show we chatted on:

This is her performing Podolianka at her own wedding.

...and someone else's wedding (where she puts me in mind of the late Al Czerny):

For those earlybirds amongst us, here she is doing a medley of Ukrainian Christmas tunes:

And one more medley of Ukrainian folk tunes:


See you at the show!