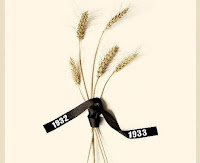 The week of November 21-27 is the fourth annual National Holodomor Awareness Week, which was first launched by the Ukrainian Canadian Congress.

The goal is to annually unite the Ukrainian community and all Canadians in remembering the victims and raising awareness of this genocide the 1932-33 Ukrainian famine genocide known as Holodomor (translation: death by hunger).

This year, International Holodomor Memorial Day will be observed on

Prime Minister Stephen Harper issued this statement today:
“On Saturday, November 26, I join Canadians in remembering and honouring the millions of men, women and children who suffered horribly and perished during the Ukrainian famine-genocide of 1932-1933. Moreover, I encourage all Canadians to participate in the many Holodomor commemoration ceremonies taking place this weekend across the country to learn about this terrible episode in human history.

“The Ukrainian famine, under the oppressive Soviet communist regime of Josef Stalin, remains one of the most atrocious crimes against humanity ever perpetrated. It also reminds us of

The award pays tribute to people in Canada who have contributed to multiculturalism and the integration of new Canadians. It commemorates the legacy of the late Senator Paul Yuzyk, who worked to establish multiculturalism as a fundamental characteristic of Canadian identity.

While a single winner of the award is chosen each year, their selection is from one of two categories: Outstanding Achievement or Lifetime Achievement.

More chocolate on this week's edition of Nash Holos

Coming up this weekend on the PCJ Radio network, and on the podcast for last Sunday's Vancouver broadcast:
Vancouver podcast available now on the Playlist page at the Nash Holos website.

On this week's show:

Here's what's on:
The international edition of this show will air on the PCJ Radio partner stations this weekend, and on CHLY 101.7FM in Nanaimo on Wednesday Nov 16 at 2 pm.

Honorary Consul of Ukraine in Vancouver

Mir Huculak is a very well-known personality in the BC Ukrainian community to which he has devoted himself for decades.

Less well-known perhaps are the details and scope of his work and accomplishments over the years, in particular the past 3 or 4 years as Honorary Consul of Ukraine in Vancouver.

In my 20+ years here on the west coast of Canada, I have noticed that at any festival where there is Ukrainian presence, it’s impossible to not bump into Mir!

However, quite frankly I had no idea really what exactly it is that a Consul (or for that matter a Consolate) does.

At one festival this past summer I had the good fortune to chat with Mir for a few minutes. He graciously agreed to come on the show to tell Nash Holos listeners a bit about his role as Honorary Consul of Ukraine in British Columbia, what function a consulate serves and some of projects he is currently working on at the consulate.

Our interview aired on Nash Holos Ukrainian Roots Radio in Vancouver on AM1320 on October 23, 2011, and on the PCJ Radio Network the following weekend. You can hear the full interview here.