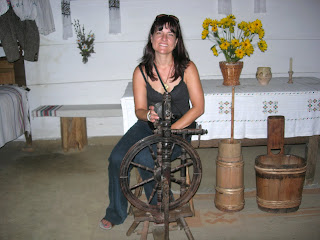 A writer who speaks fluent Ukrainian, Natalia has embarked on an ambitious journey, taking Nash Holos listeners on a delicious trip down memory lane as she explores a fascinating piece of Ukrainian culinary history.

The roadmap for this trip comes via the Ukrainian to English translation project of a cookbook dating back to 1929. Entitled Універсальна Галицька Кухня (Universal'na Halytskia Kukhnia), it tramslates into English as Galician Kitchen.

We came across this book through Oleh Iwanusiw, a member of an online writing group that Natalia and I belong to.

Oleh has an acquaintance in Lviv, Ivan Lutchuk, who happens to be the grandson of Olha Senatovych, the book's author. Ivan also happens to actually have in his possession the very hand-written cookbook his grandmother compiled!

Written in the beautiful Galician Ukrainian vernacular of that time, it has traditional recipes for everything from fish dishes to tortes, and even instructions on how to keep your kitchen vermin-free!

Having learned about this incredible treasure, our writer's group decided it was just too wonderful not to share. So with Oleh's and Ivan's permission, Natalka is doing the Ukrainian to English translation, and in the process sharing her culinary discoveries with Nash Holos listeners.

Very little is actually known about the author, however. From photos Ivan sent us, we do know Olha was beautiful and fashionable. She obviously came from an upper or upper middle class family, in Lviv, western Ukraine. ﻿﻿﻿﻿﻿﻿﻿﻿ 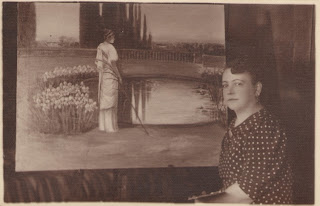 She lived for a while in Vienna, and was an artist at a time when women were just being officially admitted into the great art schools of the West, such as the Academy Julian and the Ecole des Beaux Arts in France.

And, based on her book, she was no doubt an adventurous cook and highly competent homemaker! 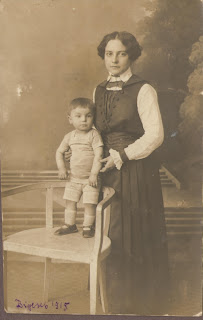 While the 1920s were a time of political instability and upheaval in western Ukraine, they were nonetheless a heady time for kitchens. New inventions and innovations in kitchen design swept Europe (particularly Germany and Austria) and soon made their way to North America.

Presumably Olha had a modern kitchen. It was probably painted Venetian green or Pale Organza. She likely had built in wood cabinets that sat flat on the floor instead of on legs, with a work counter, aluminum drawers with oak bins for storing flour (oak repels meal-worms), and a garbage drawer for scraps.

For appliances, she might have had a Kitchen Aid mixer (they were around by then) and a gas burning stove, although probably without a thermostat on the oven (she doesn't give any temperatures in her recipes). Although refrigerators had already been invented, Olha likely was still using an icebox.

The recipes in her cookbook are quite sophisticated. Many clearly reflect the influence of Vienna, the capital of the Austro Hungarian Empire which had ruled western Ukraine prior to the end of WWI. The Austrian nobility routinely brought in French and Italian chefs to cook for their banquets and celebrations. So the luxury and festive style of the dishes prepared by these foreign chefs soon began to influence Ukrainian dishes - modern variations of which are prepared in Ukrainian homes today.

Natalia will be sharing many of those recipes on Ukrainian Food Flair every other Sunday on Nash Holos Ukrainian Roots Radio. So make sure to join her on her exciting culinary journey!

It's been a very exciting month with some exciting developments here at Nash Holos Ukrainian Roots Radio.

Most recent is the return of Ukrainian Food Flair. This time we have two hosts... long-time Nash Holos personality Sylvia Pidraziuk Molnar of Vancouver, and radio newcomer Natalia Buchok of Oakville, Ontario.

The others will be unfolding in the weeks and months ahead.

So I hope you'll forgive the still-sporadic blogging and web updating. I am hoping to return to a more regular schedule soon!

In the meantime, however, the audio archives have been updated on the Nash Holos website. Here's what aired on this past Sunday's show.

Buckwheat is very popular in Ukrainian cuisine as well as in Japanese, Jewish and others, but not particularly in North America, where it’s used mainly as flour for pancakes.

This “grain” (which is technically classified a fruit) is chock full of goodness and very low in calories. It’s an excellent source of protein, trace minerals, fiber, amino acids, and vitamins, including the entire B spectrum.

Ukrainian Food Flair is back on Nash Holos!

Vancouver's well-known and beloved foodie Sylvia Pidraziuk Molnar has returned to the airwaves! Her first return feature aired on the May 8, 2011 edition of Nash Holos Ukrainian Roots Radio.

Sylvia will be alternating weeks with Natalia Buchok, who made her radio debut on Sunday, May 22, 2011.

The Toronto Star calls them a National Treasure – Canada’s professional Ukrainian Dance Company celebrates 50 years of dance tradition in a whirlwind of colour, power and grace.

Win a new radio and hear radio programs from around the world!

My colleague and syndication partner Keith Perron of PCJ Media has just reviewed the brand new Sangean shortwave radio. And some lucky listener will win one!

Veselka to celebrate 40 years of Ukrainian dance on Vancouver Island

On May 21 and 22 Victoria's Veselka Ukrainian Dancers will host two events to celebrate their 40th anniversary.

There's something for everyone at the annual BC Ukrainian Cultural Festival ... non-stop dance competitions by dancers from all over British Columbia and the Pacific Northwest, fabulous Ukrainian cuisine (usually provided by Judy Hrynenko of Prairie Cottage Perogies), live music by roving musicians, and all kinds of Ukrainian arts, crafts, and cultural displays.

So the 25th anniversary of the Chernobyl nuclear disaster has passed. And, par for the course, the world`s attention is waning.

Having made the inevitable comparisons to the nuclear disaster in Fukishima, Japan a mere two months ago, the international media has moved on to sensationalise more recent disasters and debacles.

So the less common practice of delving deeper and trying to make sense of the devastation that rained down on the unsuspecting populace, and to (perhaps) help humanity to learn from its mistakes, falls to