To some such a greeting on Jan. 6 may seem late and backwards, but Ukrainians will "get" it.

After all, on the Julian calendar this is Christmas Eve, and many Ukrainian Canadians are just beginning their second round of Christmas celebrations... after celebrating it on the Gregorian calendar with the rest of the non-Ukrainian and non-Eastern Orthodox/Christian world. 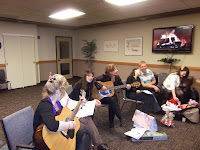 That is certainly the case for me. My DH (a.k.a. Dear Husband) and I celebrated Christmas with my extended family in Winnipeg last month ... parents, siblings, in-laws, nephews, nieces, and beautiful, charming, delightful, brand-new great-niece. And a good friend or two. 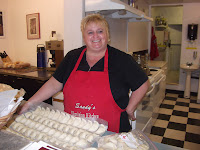 Now I'm ready for Christmas, Round 2, with west-coast cousins, and cousin-by-marriage Sandy Kosolowsky.

Sandy owns and operates Sandy's Ukrainian Kitchen here in Nanaimo and puts on a Ukrainian Christmas dinner in
nearby Nanoose every year.

December, she tells me, was as crazy a month for her as it was for me. So it's wonderful to have an extended Christmas season with enough time to enjoy the holiday!

Back in the day it used to be called Ukrainian Christmas and it's still generally known as such by the rank-and-file of those "in the know" here in Canada. However, some elements of Canadian society are trying to change that.

Now official circles are just eschewing a label altogether. The Honourable Jason Kenney, Minister of Citizenship, Immigration and Multiculturalism, issued (italics mine) the following statement to mark the celebration of Christmas by Christians observing the Julian calendar:


“I would like to take this opportunity to extend my warmest wishes to those Christians of the Eastern Orthodox, Oriental Orthodox and Eastern Catholic Churches who are celebrating Christmas this week..." (Full text here.)

Well I guess it's his job to be "inclusive."

Personally, I have no compunction calling it Ukrainian Christmas. That's what everyone in Canada (including non-Ukrainians) called it for a very long time ... and I am a great adherent of time-honoured tradition!

This year the Ukrainian Canadian Congress, disappointingly, danced around the issue too ... they didn't label it either. (Excerpts from their Christmas greeting, sent out yesterday, are below.)

Nonetheless, the message is lovely, as is the illustration that came with it, by Edmonton artist, Larisa Sembaliuk Cheladyn.

As the first star appears in the evening sky on January 6, Ukrainian Canadian families will gather to celebrate Christmas Eve.

Sviata Vecheria (the Christmas Eve Supper) is steeped in tradition and features a humble and reverent 12-dish meal in honour of the twelve apostles spreading food for the soul throughout the world. The dishes contain no meat or dairy products to show respect for the animals that shared their place of shelter and were present for the birth of Christ. It is the climax of a six-week Nativity Fast period called Pylypivka.

On Christmas Eve the traditional dinner table has a few wisps of hay under an embroidered tablecloth as a reminder of the manger in Bethlehem. A decorated sheaf of wheat or "didukh", symbolizing the harvest, is placed in a corner of the room under an icon, with each kernel of the didukh denoting the spiritual presence of family and forebears. All are called to the table when the first star appears in the eastern evening sky.

Sviata Vecheria begins with the oldest member of the family offering guests a piece of bread dipped in honey as a sign of plenty and family unity. The supper continues with courses introduced one by one starting with kutya, which is cooked wheat sweetened with honey and dressed with poppy seeds symbolizing prosperity, peace and good health, and concluding with dessert featuring "uzvar" - a compote of stewed fruit.

Carolling begins after the Sviata Vecheria as groups of carollers go from house to house and "for a song" the hosts provide a donation to the charity the carollers have chosen.  Ukrainian Christmas carols ("koliadky") are a part of the rich Ukrainian oral tradition and through them one can trace the Ukrainian historical experience to antiquity.

To enjoy some of those traditional Ukrainian Christmas carols, make sure to tune in to Nash Holos Ukrainian Roots Radio this weekend ... tomorrow on AM, FM and shortwave radio on the PCJ Radio network, and in the Vancouver listening area on Sunday Jan. 08, 2012 on AM1320 CHMB.

Happy Ukrainian Christmas to you as well! What a wonderful celebration you appear to have had :) Love the Cheladyn image you've shared - her work is so beautiful!

I agree, Larissa's art is gorgeous, and that image in particular is outstanding.

Hope you're having a wonderful Christmas as well, and thanks for the comment. It's nice to hear from a fellow former Saskatchewan girl. :-)