BC is joining Quebec on the path to official recognition of the famine genocide in Ukraine of 1932-33 (Holodomor). Bills introducing legislation to do so passed first reading in both provinces yesterday.

News of the Quebec reading were reported yesterday and details of the bill can be found here.

Meanwhile, here in British Columbia, a delegation of 14 people watched as New Democrat MLA for Surrey-Whalley, Bruce Ralston, introduced Bill M207 in the legislature. The delegation included survivors, local community members, and a retired officer of the Ukrainian Armed Forces currently visiting BC.

Many thanks to MLA Bruce Ralston for his relentless support and efforts to have BC officially recognize and commemorate the Holodomor. He has been at it for some time, as this excerpt from Hansard demonstrates.

The legislation proposes that the fourth Saturday in November every year be commemorated as Holodomor Memorial Day in B.C. It also recognizes the survivors of Holodomor who moved to British Columbia and made a positive contribution to the province. (A draft transcript of Bill M207 can be found here.)

As mentioned in an earlier post, the provinces of Saskatchewan, Alberta, Manitoba and Ontario have enacted legislation recognizing the Holodomor and honouring the survivors of this crime against humanity, as has the federal government.

Pictured here are representatives of BC's Ukrainian community present at the reading in support of Mr. Ralston in his efforts to promote Holodomor recognition and awareness, along with other MLAs. 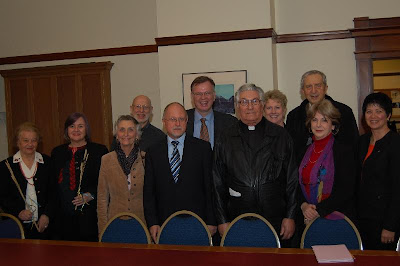 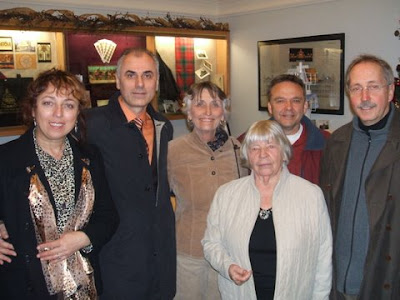 Many thanks to the politicians in both provinces for introducing and supporting these bills. It is inspiring and encouraging to see them put aside their political rivalries from time to time and do the decent human thing together.

Thanks also to the local Canwest folks out east for reporting the story in Quebec, and to the Montreal Gazette for carrying it. Not surprisingly, our local BC media did not see fit to report on the reading here. Likewise it escaped the notice of the national media that two provinces introduced more or less identical legislation on the same day. I guess they do not consider it newsworthy when events and issues bring people together, as opposed to dividing them ... especially in the arena of partisan politics. Which is fine. Gives us citizen journalists an opportunity to hone our skills.

National Holodomor Awareness Week continues through November 29. You can find a list of commemorative events across the country here or visit the UCC website.

I agree! All I could find was that draft transcipt from Hansard.

It would be nice for the BC bill to be online in as elegant a format as the Quebec one.

Hopefully Mr. Ralston will have someone post it soon.

It is great to hear that both BC and QC passed bills on the same day regarding the recognition of the 1932-33 famine as genocide.

We must not forget that so much of that work of what defined genocide was done by Dr. Raphael Lemkin who was recoginzed as "father of the genocide convention."

Lemkin himself in 1953 at a lecture in New York City it was Lemkin who even noted that there was "destruction of the Ukrainian nation" as the "classic example of Soviet genocide," adding insightfully: "The Ukrainian is not and never has been a Russian. His culture, his temperament, his language, his religion, are all different ... to eliminate (Ukrainian) nationalism ... the Ukrainian peasantry was sacrificed ... a famine was necessary for the Soviet and so they got one to order ... if the Soviet program succeeds completely, if the intelligentsia, the priest, and the peasant can be eliminated then Ukraine will be as dead as if every Ukrainian were killed, for it will have lost that part of it which has kept and developed its culture, its beliefs, its common ideas, which have guided it and given it a soul, which, in short, made it a nation ... This is not simply a case of mass murder. It is a case of genocide, of the destruction, not of individuals only, but of a culture and a nation."

That was in 1953 only twenty years after that horrid period of the history of mankind in the twentieth century.

The world must recognize the Holodomor as a genocide if they are to recognize the definition of genocide. For the father of the definition himself recognized what an autrocity had taken place.. or has the world leaders, particularly those in Europe, following in the path that many of them did after the Treaty of Versailles but with a twist. Rather than ingnoring the newly formed Soviet Union back they are now kissing the ass of the Russian Federation for the reasons outlined by Lubomyr Luciuk in the Opinion piece linked to above which appeared in the Montreal Gazette on Friday November 27, 2009.