While in Toronto this past weekend I enjoyed a live in-studio guest appearance on Radio Kontakt, hosted by Andy Holowaty and Uliana Hlynchak. 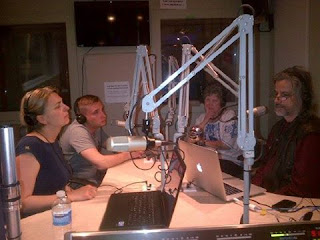 The show airs Sundays at 9pm EST on multicultural channel AM530.

Andy had me on the show via Skype a couple of times already, so it was a treat to do it again ...this time in their live studio. It was great to meet Uliana and share the mic again not only with a seasoned pro but a fellow guest ... who I had previously "met" on one of those Skype appearances. (I use the term "guest appearance" for lack of a better word for radio!)

My fellow in-studio guest was Anton Sestritsyn. Anton just graduated from university in Ottawa, and was involved in the Canada-Ukraine Parliamentary Program. He is now living and working in Toronto, so I imagine he will be a frequent guest on Andy's show. Anton is an outstanding young man, full of energy and great ideas. I'm so looking forward to his contributions to the hromada as well as to the greater community.

Anton was born and raised in Crimea, is now cut off from his homeland. I can't imagine how it would be not to be able to return "home" for a visit ... or any other reason, for fear of being killed or abducted. Love his new moniker: the Crimean Crusader.

Radio Kontakt is a "half-napiv" program ... i.e., bilingual Ukrainian/English. Andy and his co-host Uliana always bring on interesting guests and indulge in fascinating conversations in both languages.

If you miss the live broadcast, you can catch the podcasts here.

And stay tuned to Nash Holos ... I'm looking forward to having both Andy and Anton on the show when I get back from Ukraine.
- May 28, 2015

My crisis is very severe. Two months in a row no hope for recovery. Read your blog and envy you.

Remember Andy due to Stan Nastenko. Raging Hutzuls band. He promised me to tell some details of Ukrainian language not known to me due to my 'bolshevised' education :)