On Friday morning, I experienced the indescribable, breath-taking Ukrainian Cultural Heritage Village. Being an open-air museum, it's closed for the winter, but Molly Anne has a way of getting around such minor details. ;-)

It was a lovely morning when we left Edmonton ... winter as it should be. A nice dusting of snow, lots of sunshine, and not too cold ... as long as you're dressed for it! 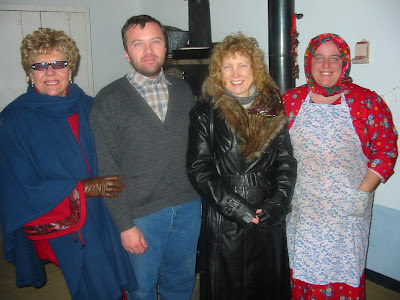 (L-R: the frozen Molly Anne, Ivanko, me, and Pam inside the Grekul House).

We were taken on a quick tour by Arnold Grandt, head of corporate and community relations for the Village ... a little "zakuska" of the time-travel experience when the museum is operating full tilt. Ivanko, a senior interpreter, also joined us but had to leave early to help fellow interpreter Pam with a school group coming to experience Ukrainian Christmas preparations in pioneer times.

This award-winning historic site showcases Ukrainian settlement in Alberta starting in 1892, when Ukrainian immigrants came to Canada and were dumped in the middle of the bush and expected to turn it into prime agricultural land with pretty much their bare hands and whatever they brought with them.

They did, but it wasn't easy. There was no government assistance for my grandparents and their compatriots and Canadians often were unkind to the struggling immigrants. Yet, while life was hard, there was a charm to living a simple life and pride in being self-sufficient while contributing to the development of Canada. There are many lessons here for current immigrants to Canada, as well as people born here.

I told my sister about the Village when she came up from Calgary on Saturday to take me off Molly's hands. She's already begun organizing a family gathering to take in all of the Kalyna Country ecomuseum, of which the Village is just a part.

Knowing my family (that bunch of party animals!), I'm certainly in for another adventure! But until the Village re-opens, take this fabulous guided cyber-tour and check out this virtual tour to get a "sneak preview" of what to expect.
- December 03, 2007