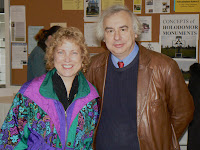 "Okradena Zemlya" translates into English as "Plundered Land." What I found different about this film from other Holodomor films is that watching it was like picking a scab off a sore too soon. Or, to word it more elegantly, reopening an old wound.

But the former description is really what it felt like for me. I can't talk with any credibility about re-opening wounds because my parents were Canadian-born toddlers when the Holodomor was happening, and all my (known) relatives had long since emigrated to Canada. So I didn't have a wound; I learned about the Holodomor in university in the 1980s. And while I was outraged and horrified, what I felt was just a surface cut compared to what survivors experienced, and carried with them, for decades.

Nonetheless, picking a scab off a cut that hasn't completely healed can hurt, and even bleed. And that is what I felt when I watched this film.

It wasn't just an academic recitation of the details of a horrific mass murder. The film portrayed the sense of hope and optimism that soviet socialism promised, particularly with the (short-lived) Ukrainianization of culture in the Ukrainian SSR. Then it depicted, vividly and graphically, the hope gradually dimming under the mounting sense of betrayal, disbelief, and abject horror that the people who lived (and died) through it would have experienced.

Somehow, Yurij was able to simulate that excruciating, gradual realization of what was happening, and the accompanying sense of utter helplessness. It was so stark that I couldn't even cry. I was numb.

The film was all in Ukrainian so, unfortunately, I missed a lot of the nuances. There's an English version planned, but funds are needed before it can be completed. Which is why Yurij is touring Canada with the film.

If you understand Ukrainian, even imperfectly, you need to see this film. If you missed the screening, buy a copy or two of the DVD and/or make a donation. An English version will get the message to more people, so that more will hopefully learn from it.

You can go to this website (here) for more information about the film. You can make a donation there as well as order this film and/or any of Yurij Luhovy's other excellent productions.

I was fortunate to be able to speak with Yurij by phone a couple of weeks before his arrival in Vancouver. The interview aired on Nash Holos on October 11 and features cuts from the soundtrack. If you missed it, you can listen to it here.
- October 30, 2009