Canada and Ukraine Agree on Priority Areas of Cooperation

Today, the Honourable Lawrence Cannon, Minister of Foreign Affairs, and Volodymyr Khandogiy, Ukraine’s acting minister for foreign affairs, today signed a document that sets out priority areas of cooperation between the two countries.

“I welcome the signing of this document as a further example of Ukraine’s commitment to democratic reform and a testament to our strong and growing bilateral relationship,” said Minister Cannon. “Canada attaches great importance to its relations with Ukraine, a key European partner. Canada has a significant Ukrainian-Canadian community of over a million people.”

“Canada is a strong supporter of Ukraine’s Euro-Atlantic aspirations, and will continue to partner with Ukraine in that regard,” said Minister Cannon. 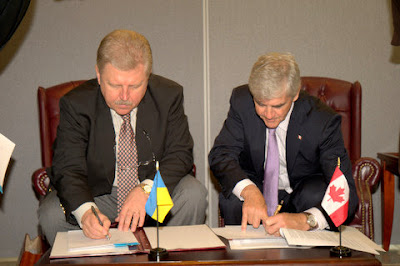 Well, another great news. Having strong relations with Canada and USA does Ukraine need those tolerating occupation of Georgia and on Russiаn payroll partners in Western Europe?