On Sept. 22, 2009, The Honourable Stockwell Day, Minister of International Trade and Minister for the Asia-Pacific Gateway, announced the launch of talks between Canada and Ukraine on a free trade agreement (FTA).

An FTA with Ukraine could further open markets for Canadian exports ranging from agricultural and seafood products to machinery and pharmaceuticals. It could also help to address non-tariff barriers.

Day made the announcement with Ukraine’s Minister of Economics, Bohdan Danylyshyn, right after the negotiations with the Ministry of Economics. Both Canada and Ukraine have agreed to meet in the coming months to discuss a range of trade and investment issues to facilitate economic relations and fight protectionism.

In theory, and in practice if followed faithfully, free trade agreements help to strengthen the economy, create new jobs and lower prices for consumers in all countries involved.

Govt announcement can be found here. 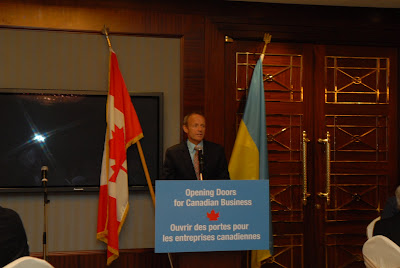 I've got a better picture for the same subj article at my web site :-) Good news though - in last two years Canada's export to Ukraine 400% up. What can we expect after FTA set?