The Honourable Stockwell Day, Minister of International Trade and Minister for the Asia-Pacific Gateway concluded his visit to Ukraine yesterday (Wednesday, Sept. 23) by announcing the signing of contracts between Canada's SNC-Lavalin Group Inc./West Group Engineering joint venture and Ukraine's Ukragroleasing.

“The signing of these important contracts will deepen our partnership with Ukraine in some critical sectors of our economies, such as agricultural equipment and services,” said Minister Day. “These contracts are great examples of the kind of connections we need to make to create new opportunities for our people to succeed in the years ahead.”

The contracts, worth over $640 million, are for the design and engineering of grain-storage facilities and milk-collection systems across Ukraine. SNC-Lavalin Group Inc.-West Group Engineering has also reached an agreement with Ukraine's Ministry of Health to build medical clinics across rural Ukraine.

While in Ukraine, Minister Day also oversaw the signing of an agreement valued at $254 million between MacDonald, Dettwiler and Associates of Richmond, B.C., and the National Space Agency of Ukraine to build satellite communications systems in advance of the Euro 2012 soccer tournament being co-hosted by Ukraine.

During his visit, Minister Day annouced the launch of talks with Ukraine on a free trade agreement and met with the Prime Minister of Ukraine, Yulia Tymoshenko, to address a number of challenges related to the ability of Canadian businesses to invest in the Ukrainian market. Minister Day also met with the General Director of the National Space Agency, Olexandr Zinchenko, to support Canadas strong commercial relationship with Ukraine, which is marked by growing trade and investment, and cooperation in the aerospace sector.

Finally, Minister Day met with Ukraine's Minister of Fuel and Energy, Yurii Prodan, to discuss the feasibility of Canadian CANDU technology for the expansion of Ukraine's nuclear program. 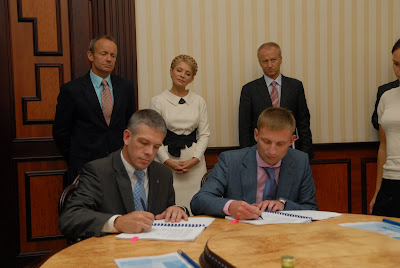