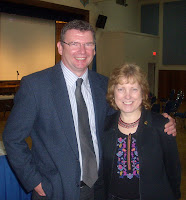 Three Ukrainian Canadian writers in BC attended the presentation on the massacre of the Cossacks at met a fellow author who was launching his book, Surviving Lienz. The author, Anthony Schlega (writing as Anton Schleha) lives in and recently joined a writers’ list-serv that I co-moderate with . Marsha launched the list when she brought a group of writers together to collaborate on Kobzar's Children: A Century of Untold Stories, an anthology she was editing. Since then the group has expanded to include other aspiring writers as well as published authors writing other untold Ukrainian stories. 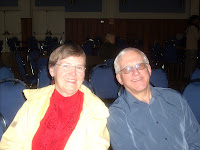 One of the BC writers attending Anthony’s book launch was Danny Evanishen, one of the original list members and a fellow Kobzar’s Children contributor. Danny also runs Ethnic Enterprises, which produced and distributes Anthony’s book in Canada on behalf of the publisher, Innsbruck University Golf Publishers. (The book is available for purchase from Danny's website (here) for those unable to attend one of their presentations.) Danny and his wife Jean just came down for the evening and had to head back to the Okanagon today. So there was only time for a couple of hurried snapshots (and a few bad jokes of Danny’s I hadn’t heard before). Danny has some new books on his website and Jean creates beautiful Trypillian pottery, so I’ll be doing some in-depth interviews on Nash Holos with both of them in the not too distant future. 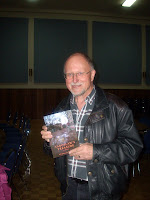 Anthony is still exploring his father's past and is working on a personal memoir, so you'll be hearing more about him and his work in the future as well. He'll be returning to Canada at some point in the future with Dr. Stadler to continue spreading the word about the Bridge of Remembrance project in Lienz, Austria. I'll bring you the details the minute I get them!