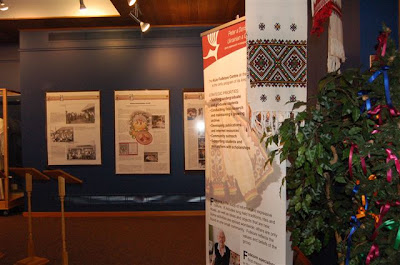 Ukrainian Weddings, a multi media display, was developed by the staff at the Kule Folklore Centre at the University of Alberta for its initial launch at the 2007 Ukrainian Festival at Harbourfront in Toronto, Ontario.

The exhibit is a series of panels and videos that explore Ukrainian Wedding traditions through four different times and settings. 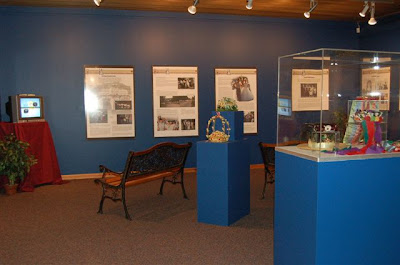 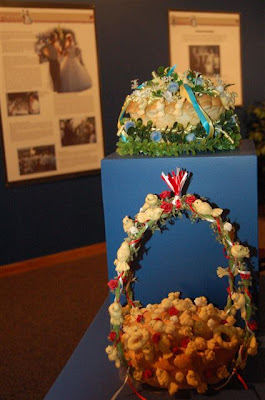 The Saskatoon exhibit also has antique Ukrainian wedding headpieces, examples of Korovaii – a traditional wedding bread – and an authentic wedding dress made by one of the donors of the Kule Folklore Centre – Mrs. Anna Kuryliw – in her Ukrainian village in 1936 and brought to Canada for her wedding to Wasyl Kuryliw. The decorated tree in the front of the picture below is a traditional Ukrainian Wedding Tree - a "derevtse." 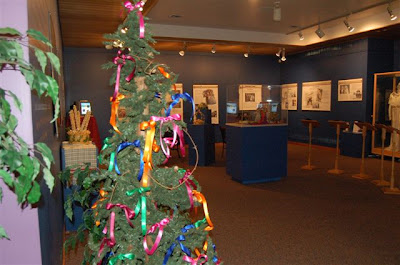 Several members from the Kule Folklore Centre were on hand for the opening of the exhibit which featured refreshments and hors d oeuvres and a tsymbala player who greeted the 130 guests at the exhibit entrance.

They noted that the Kule Folklore Centre is committed to the exploration and documentation of Ukrainian and Canadian culture through teaching, research, archiving, publishing, scholarships and active community engagement.(Folklore and ethnology are the study of arts, customs, beliefs, songs, crafts, and traditions, as well as the people who partake in them.) 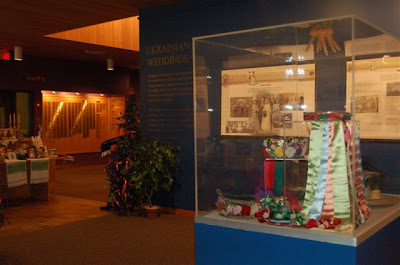 The exhibit (which has since been shown at the Moncton Museum, New Brunswick; Vegreville Pysanka Festival; several Edmonton events; and Folkfest in Saskatoon) will be at Saskatoon’s Ukrainian museum until early November.

If you're fortunate enough to be in the vicinity of this fabulous exhibit, I hope you'll take the opportunity to see it. As for those of us out here in Lotusland, we're hopeful it will one day make its way to the west coast!