Our excursion to Kaniv

On Friday, my last full day in Kyiv, our tour group went on a day trip to Kaniv, the final resting place of the revered Ukrainian bard Taras Shevchenko.

This was the view from the monument over his grave. It was all he ever wanted in life ... to gaze at his beloved Dnipro and the lands and horizon beyond it. But he was denied that simple pleasure by tsarist Russia which kept him in exile, and in chains. 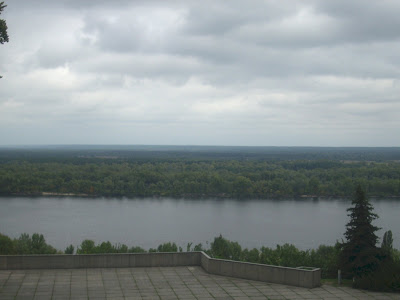 Isn't it bizarre (and sad) how a powerful imperialist regime could be so threatened by a poet whose words just encouraged the Ukrainian people to be proud of their language, their history and their heritage, that they persecuted him for his entire life?

Obviously there is something to that Ukrainian proverb: В руках поета-героя, дуже небезпечна зброя. (The hand of a poet can be a dangerous weapon.)

Below is a snapshot of the actual monument itself. Our tour guide told us that originally there was a large cross marking the grave, but the soviets took it down and replaced it with this statue. It would seem the successors of the tsarist regime were similarly threatened... by a religious symbol. 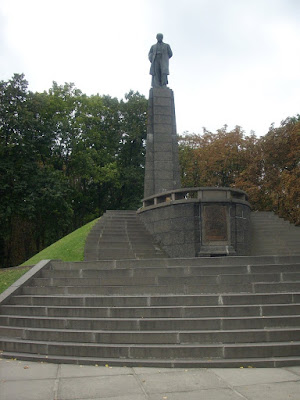 This is the tour guide (his name was Victor) who took us around the park and told us about the life and times of Taras Shevchenko. His English was impeccable and he had us all spellbound. I knew that Shevchenko was an accomplished painter, but I hadn't actually seen much other than poor reproductions of his self-portraits. Victor showed us some nice photographs of Shevchenko's paintings. He was truly brilliant. 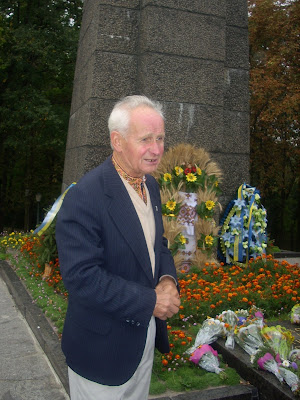 This is the house of Shevchenko's childhood. We were able to look, but not actually go, inside the rooms. 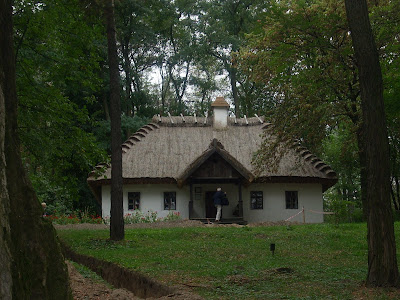 Some beautiful artifacts were on display... 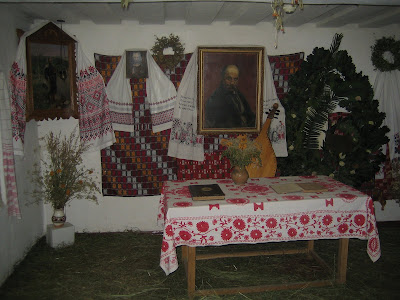 Quite a lot of exquisite embroidery and paintings. 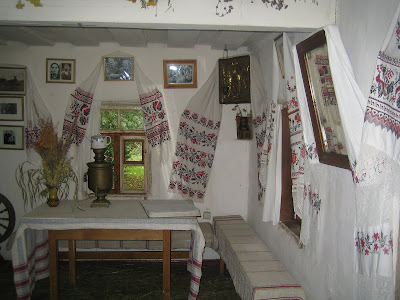 Here's a close-up of the thatched roof. Quite intricate, and obviously required a fair amount of skill! 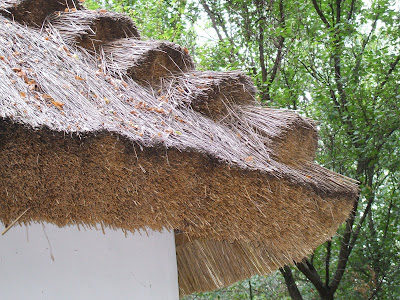 Outside the хата were some simple, but beautiful gardens. The kalyna was so striking that we all had to take close-up shots of it. (I was tempted to snitch a berry and taste it, but didn't dare...) 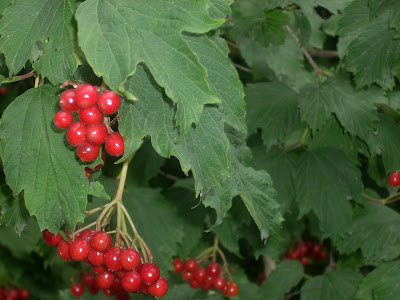 Isn't that a brilliantly beautiful fence for the flowers? 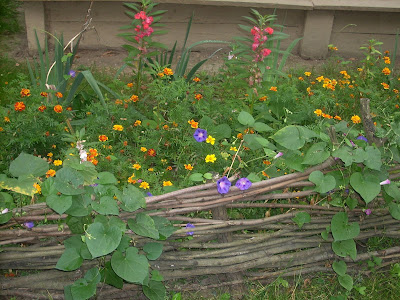 Our next stop was lunch in the restaurant at the hotel on the premises. But first, a detour. We had all heard about the possibility of encountering toilets that weren't exactly what we're used to, and that were essentially just holes in the floor. We came prepared with our own paper and little bottles of hand sanitizer, but weren't quite sure what to expect.

So we lined up, and when it was my sister Marilyn's turn, she handed me her purse and coat, rolled up her sleeves, took a deep breath, then said: "OK, I'm ready" ... and with great resolve and determination, marched into the cubicle. This is what she saw: 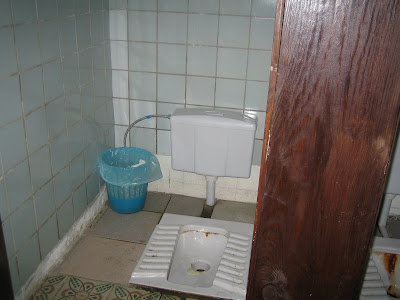 Well, I figured I could do it, too. So, I followed in my sister's footsteps. Literally. But it would seem I may require a bit more practice to be able to consistently aim straight. (OK guys, you just go ahead and laugh. You couldn't possibly relate...) 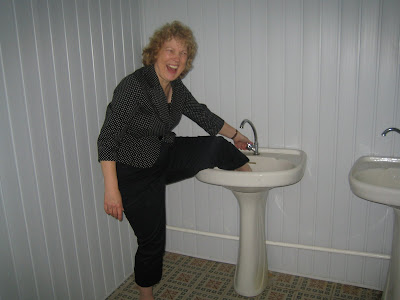 Anyway, I must say I was just glad to have been wearing leather (i.e., washable) sandals and bare feet! Actually, there was lots of water and altho it smelled like an outhouse, the facility was actually reasonably clean.

It was very nice to see several groups of schoolchildren visiting the monument with their teachers, and learning about this important figure in their history. 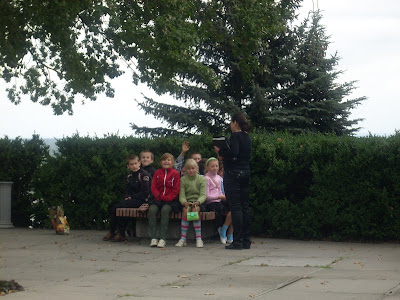 As you can see, the wonderful weather that greeted us a couple of days earlier was long gone, so we didn't linger much outside.

After our delicious lunch we boarded the bus and headed back, past fields of corn and sunflowers growing in rich chernozem ... the fabled black earth Ukraine is famous for. And, having spent many childhood years on a Saskatchewan farm with a very well-used stone boat, so much rich soil with not a single stone in sight was quite amazing to see.

And speaking of sights, more to come...

Assembled by yours truly a number of years ago.

Thanks for that link, Orest!

What a fabulous collection of artwork. It was a joy going through it and I'll be back to visit it again in the future. It was like taking a mini-holiday, or maybe more accurately a time-travel holiday.

Thanks for doing that labour of love "way back when."

Thanks! Glad you enjoyed them.

And while I like the porcelain stand and squat potties -- I think they can be very sanitary -- like you, I have been known to have horrible aim.

Hey tulipgirl, there you are! I lost track of you after the OR ... don't know how that happened. Lovely new design on your blog and great posts! I'll be adding you to my blogroll.

Thanks for stopping by. Interesting comment re the stand-and-squat potties being more sanitary. That's what we heard from people who'd gone before us. But I don't quite get how it can be more sanitary if you don't have perfect aim... :-;

Hey, I know the man who was your guide ! Victor Savovych Tarakhan, i know him since my early childhood, at first we were neighbours, later he and his wife remained our best family friends. By the way, his spouse, Zinaida Panasivna Tarakhan-Bereza is renowned researcher of Shevchenko heritage, she's author of saveral prominent guides on a subject. One of her latest creations is "Sviatynia" book -- a huge tome full of photographs, documentary notes and what's not.. Usually You can met Mrs. Zinaida in a small "khata" just behind the museum, she's working there and provides an occasional excursion for curious minds. As to Victor Savovych, haven't seen him for ages. Thanks to your pics, he's looking fine :-)

(Got here via Neeka's blog)

Of course his name is Victor, I remember now. I didn't take my notebook with me and thought I'd remember details like the tour guide's name... (yeah right).

So anyway after I scrape the egg off my face I'll go jot down those names and contact details. On my next trip to Kaniv I'll make a point of calling on Victor and his wife.

Thanks for stopping by and for that great info!

I lived and worked in Kaniv for two years, from 2003 to 2005. Victor Tarahan lives on the 8th floor, of the apartment where I also lived - on the 12th floor.

Their family is a very "patriotic" family. It is obvious that they love their city of Kaniv, and their country.

The sad thing is how horribly corrupt their elected officials are...

Just as when Shevchenko was alive, today it is dangerous to be "against" those "in charge."

Also, following the "renovations" of the Shevechenko Museum in Kaniv, many original artifacts were stolen - and most likely ended-up in the governmental officials' homes.

Thanks, Kevin, for your comments and insights.

It is beyond disgraceful how corrupt officials in Ukraine are.

I hope the Ukrainian people will soon rise up against the louts that steal national treasures, and the myriad other lowlifes ruining their childrens' national legacy.