Having just recently returned from Ukraine where I experienced a domestic flight, I was quite intrigued to read this article in the Kyiv Post:

In negotiations with airlines wanting in on the Ukrainian market, Vinskiy said the government seeks competitive ticket fares, new aircrafts and contemporary services such as online booking.

... The influx of fresh competition and its big expansion plans for Ukraine does not have the country’s leading airlines in a panic. They claim to already be functioning as low-cost airlines...

Having once worked in the Canadian airline industry (the former Canadian Airlines International and predecessors) for many years, it was interesting to travel on a domestic flight in Ukraine and draw some comparisons ... especially to my last domestic flight(s) on Aeroflot back in 1984.

This time I flew on Aerosvit, from Kyiv to Simferopol in the autonomous Ukrainian republic of Crimea. (That's me in blue, in one of my better head shots.) 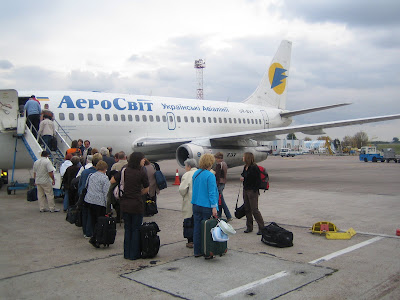 It was a Boeing 737, an aircraft I am very familiar with. The interior was starting to show signs of wear, and there was no bridge so we had to take the stairs up. However, the in-flight service was excellent and the flight was smooth and uneventful. (The best kind!) The flight attendants were attractive, smartly uniformed and distantly professional. They reminded me of the "good old days" in the airline biz, before the advent of wise-cracking, casually dressed flight attendants.

They had their work cut out for them when we landed, though. No sooner did we touch down (quite smoothly, btw) than we saw several passengers around us whip out their cell phones and start gabbering away (in Russian of course). And right after the captain asked passengers to remain in their seats and refrain from using electronic devices - including cell phones! - until the aircraft had come to a complete stop. Sigh.

OK, so it's not like that doesn't sometimes happen here. But then some yahoo got up and opened the overhead bin, left it open and then opened another one across the aisle! Hello??? We're still moving, dude, and at quite a speed.

We heard a yell from the back and the male attendant (a burly blond hunk) came rushing up, snapped the bins closed and politely shoved the bozo back in his seat.

I felt like clapping and yelling "Bravo!" ... but managed to restrain myself. (Just.) I really wished they would have gone after the cell phone yakkers as well, but that would probably have been too exhausting, not to mention an exercise in futility.

With this experience, I was starting to understand why Ukraine is having a hard time getting into the EU. If that lingering soviet mindset isn't holding the country back in its development, it sure isn't helping move it forward.

Maybe with an influx of low-cost airlines, air travel will become more common and eventually help to straighten out bozos who think safety rules are for other people. (Ditto for staying awake on the job...) 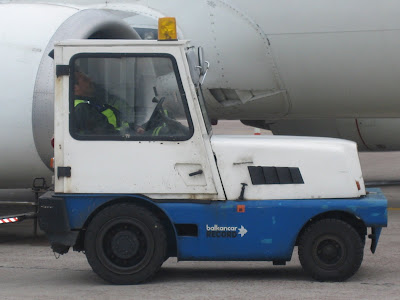 Wow, I am impressed Pawlina - you are an excellent writer. Bravo! Such professional looking writing , reach language, bravo.

And you are lucky you met those two jumping from landing aircraft. They are the most important businessmen in the World. They are almost in every plain landing to Crimea... And you are right - as long they exist EU is just a dream.

Thanks for the kind words, Stan!

Glad you enjoyed the article. I certainly enjoyed your comment. You have a great wit. :-)